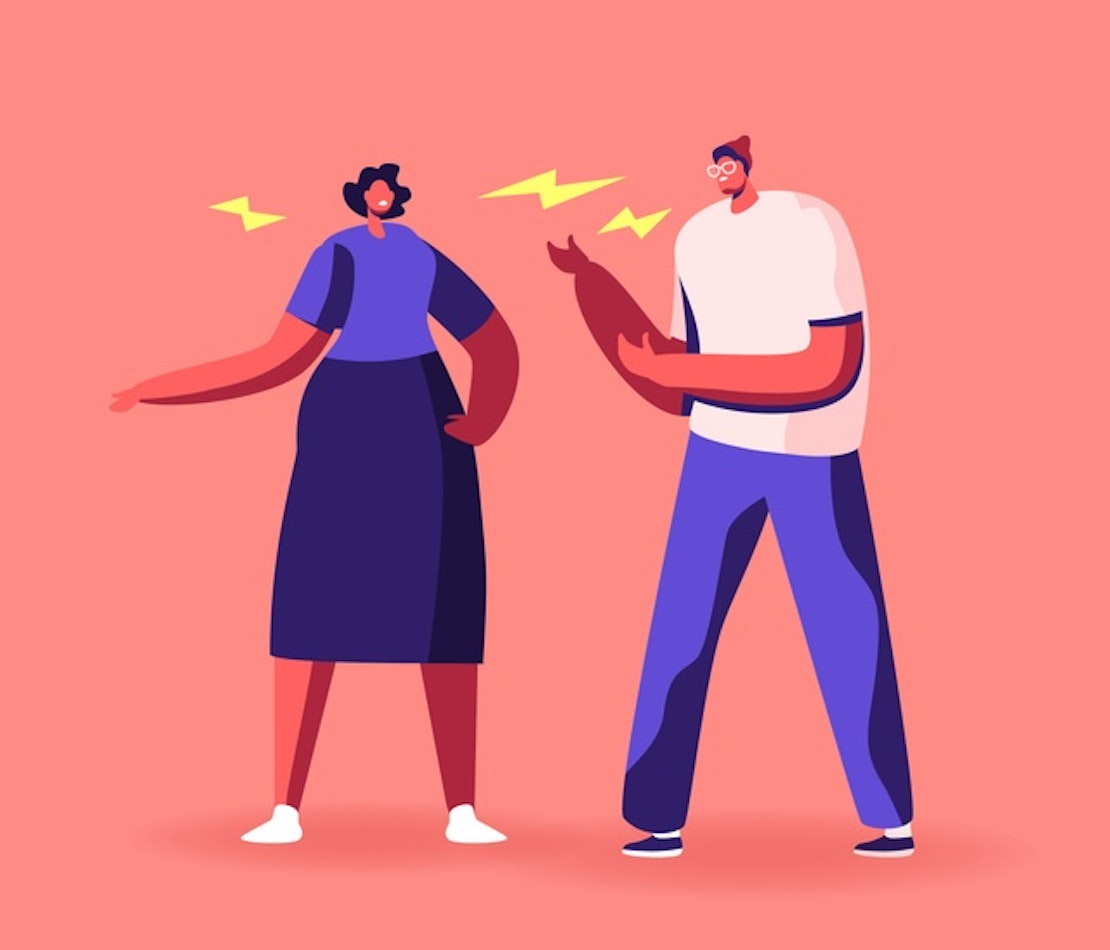 American psychologist, relationship expert, and author of What Makes Love Last, Dr. John Gottman, says that arguing in a relationship is completely normal when used as a positive form of communication.

When arguments are used as a means to find solutions and compromises, they ultimately lead to a greater understanding of each other.

We looked at the difference between a destructive and a productive argument and asked experts to weigh in on what “healthy arguments” look like.

There are lots of different reasons why couples fight, some more trivial than others. Most arguments couples have are actually about behaviors — house chores, spending habits, differences of opinion, or the small day-to-day things such as who is going to take the dog for a walk.

Unless these arguments are firmly attached to more fundamental differences between partners, they are usually fairly easy to resolve through discussion, negotiation, and compromise. But when taking out the trash is actually an argument about gender roles (as opposed to just taking out the trash), it becomes loaded and builds resentment.

A healthy approach to arguing means being able to move past these disagreements with greater knowledge and understanding of each other's perspectives, and a viable resolution to the issue at hand. Research even shows that arguing can bring you closer to your partner.

How much fighting in a relationship is normal?

Do you ever feel as though you’ve stumbled into your own Groundhog Day every time you repeat the same argument? Dr. Gottman’s study of long-term relationships found that 69% of couple problems are perpetual, or recur throughout the relationship.

To Dr. Gottman, it isn’t the amount of fighting that matters, but rather how you fight and whether you’re fighting the right way. What counts, he says, is your ability to move past these “blockers” as a couple, instead of getting caught in a repetitive loop of the same argument. ⁠

How much fighting is too much in a relationship?

Rhian Kivits, a qualified therapist sex and relationship expert at Relate, warns against arguments that follow repeated patterns, focus on reoccurring themes, and escalate without resolution. These, she says, could become damaging to the relationship.

“This behavior can become a barrier to intimacy and relationships can become dominated by perpetual arguing and bickering, which is unhealthy,” says Kivits.

“It can create a situation where the couple vilifies each other, harbors resentments and grudges, and projects blame towards each other.”

Arguments turn into frequent fights when couples start to see their disagreements as battles. “Their focus is upon who will win — by being right or getting their own way — rather than on seeking a collaborative or mutually acceptable resolution to their disagreement.”

Is fighting in a relationship toxic?

Having the same argument on rotation, and failing to resolve it each time, can be unhealthy for your relationship.

“If you’re constantly arguing, it's possible that you or your partner are struggling with each other's differences and finding it hard to communicate, compromise and negotiate solutions together. Irreconcilable differences can indicate a lack of compatibility,” explains Kivits.

Yelling or raising your voice in an argument can also be worrying, especially when an argument turns nasty, personal, or abusive. This means you’re no longer about communicating with each other but engaging in unhealthy behavior.

Silence or abandonment are other examples of unhealthy arguing and usually emotional immaturity on one side of your relationship.

“Punishing each other with silence or other actions with the intention of hurting each other's feelings is unhealthy, as is abandonment — such as when one partner walks out and then returns the next day hoping to ignore the issue,” says Kivits.

How to have a healthy argument

Arguing is essentially about communicating with your partner. As you grow and change in your relationship, there are bound to be things you’ll both need to vent about.

Reframing how you see arguments with your partner could be helpful and allow you to not get bogged down with how much you could be arguing.

“In healthy relationships, couples realize that fighting is counterproductive, take responsibility for their part in the problem, and choose to communicate instead. It's unrealistic to say that couples should never fight, but it is reasonable to hope that they'll notice what's going on and decide to break the cycle,” says Kivits.

“A healthy disagreement is one where each partner communicates their position while being willing to consider the other's perspective,” explains Kivits.

“This might be heated, and difficult feelings might be shared. However, the couple's focus is to explore each other's viewpoint and establish a resolution.”

How to Regain Trust After Cheating: 16 Ways to Build Trust Again