How to Make Up After a Fight: 6 Expert-Approved Tips

Knowing how to reconnect after a fight can feel awkward, so we asked relationship experts for their advice
by Olivia Cassano 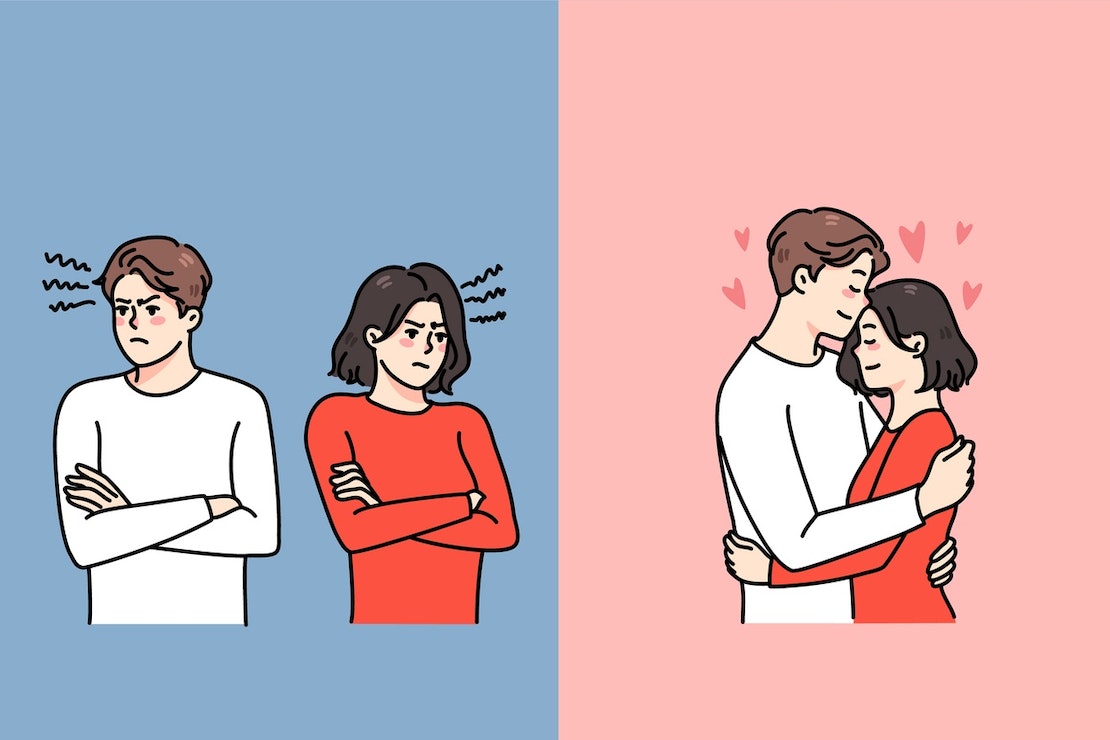 Fights happen. They’re pretty much inevitable in relationships. Every couple has arguments, the key is knowing how to make up after a fight.

“It can be hard, and even awkward, to make up after fighting with your partner,” says Dr. Elizabeth Fedrick, a licensed psychotherapist.

“Conflict often brings out most people’s worse sides. They might behave in ways they regret or are embarrassed about after. Coming back to talk about the issue that created the original fight and the behaviors that took place during the fight can feel really uncomfortable,” she adds.

Arguments can encourage growth, connection, and healthy communication in a relationship — but only if there is conflict resolution. Every relationship needs a making-up toolkit (no, saying “sorry” isn’t enough), so we asked relationship experts for their tips on reconnecting after a big fight.

1. Give each other space

“Sometimes it’s necessary to take time to calm down either during or after an argument with your partner,” says Dr. Fedrick. “This is absolutely healthy and acceptable but should be communicated in a safe and loving way. I often suggest to my couples to set ground rules around ‘time-outs’ during conflict.”

If you need some time to yourself after fighting with your partner, the key thing is communicating that need. “Let your partner know that you are feeling emotional or overwhelmed and just need a little while alone to collect your thoughts,” says Dr. Fedrick.

“Give them an idea of how long you will be gone and ensure they know you will return at that time,” she adds. “By handling it in this way, your partner will be less likely to feel rejected or abandoned, thus preventing further conflict or hurt feelings.”

If you're not ready to makeup, you can say something like "I'm not trying to ignore you, but I’m still upset and need more time to cool off." Meanwhile, if you want to check in with your partner to see if they’re ready to talk again, simply ask them "Are you ready to talk, or do you need more time?"

You might be tempted to act as if nothing happened, but experts warn this is the wrong approach. Research shows that avoiding conflict actively hurts relationships.

“One of the biggest mistakes that couples make after the fight is brushing it under the rug and not communicating about what took place,” says Dr. Fedrick.

“Many couples will get in a big fight, not talk for a few days, and then just go back to normal functioning. This is incredibly damaging because [it] prevents resolution and relational repair from taking place.”

Once you and your partner have both had a chance to cool off, sit down to talk about what led to the fight, and how you’re both feeling about it. “You want to ensure that each partner gets a chance to express how they are feeling and what they need from the other partner to work towards repairing the relationship,” explains Dr. Fedrick.

“Often people give their partner the silent treatment rather than saying ‘I need some time to think about what happened’,” says Kristin Davin, a licensed psychologist at Choosing Therapy. As hard as it can be to make up after a fight, ignoring your partner is never the answer.

Research even found that couples who use the silent treatment are more likely to be unhappier, have worse communication, have less intimacy, and report higher levels of anxiety within the relationship.

Remember, needing a time-out is perfectly valid as long as you communicate that need to your partner.

4. Talk about the fight

“When the cause of the fight doesn’t get discussed or resolved, this means there is also no opportunity for each couple to feel seen, heard, and understood,” says Fedrick. “Communicating about the reason for the argument, as well as about how each partner is feeling, is a crucial part of resolving conflict.”

Using "I feel” statements can help you express your feelings without placing all the blame onto your partner, who might otherwise get defensive.

“Communicating your needs at this time is very important as it allows the person to know how you feel, and where you are so that boundaries and having time to process are honored,” says Davin.

Davin also recommends a healthy dose of introspection. “People often don't know how to make up after a fight because feelings get hurt by each party and it's challenging at times to lean in with vulnerability and express how you (not your partner) could have done things differently,” she says.

“They also blame their partner for the fight and get defensive about their role in the argument, and repeat the same issue without thinking about how to resolve it.”

While it’s easy to play the blame game, part of making up after a fight is acknowledging the role you both played. The idea isn’t to shoulder all responsibility for the fight, but rather not to place all the fault onto your partner.

6. Come up with a game plan

Once you’ve had a chance to talk about the fight with your partner and examine your role in the conflict, come up with a plan going forward to help you navigate future arguments.

How to Take a Break in a Relationship

How to Know When to Leave a Relationship

It’s not always easy to know when to leave a relationship, so here are some tips to help you make the right decision
By Paired

How to Save a Relationship Without Trust