What LGBTQ+ Relationships Can Teach Us About Love

Research shows LGBTQ+ relationships tend to be happier — here are 7 lessons we can learn from them
by Dr. Jacqui Gabb 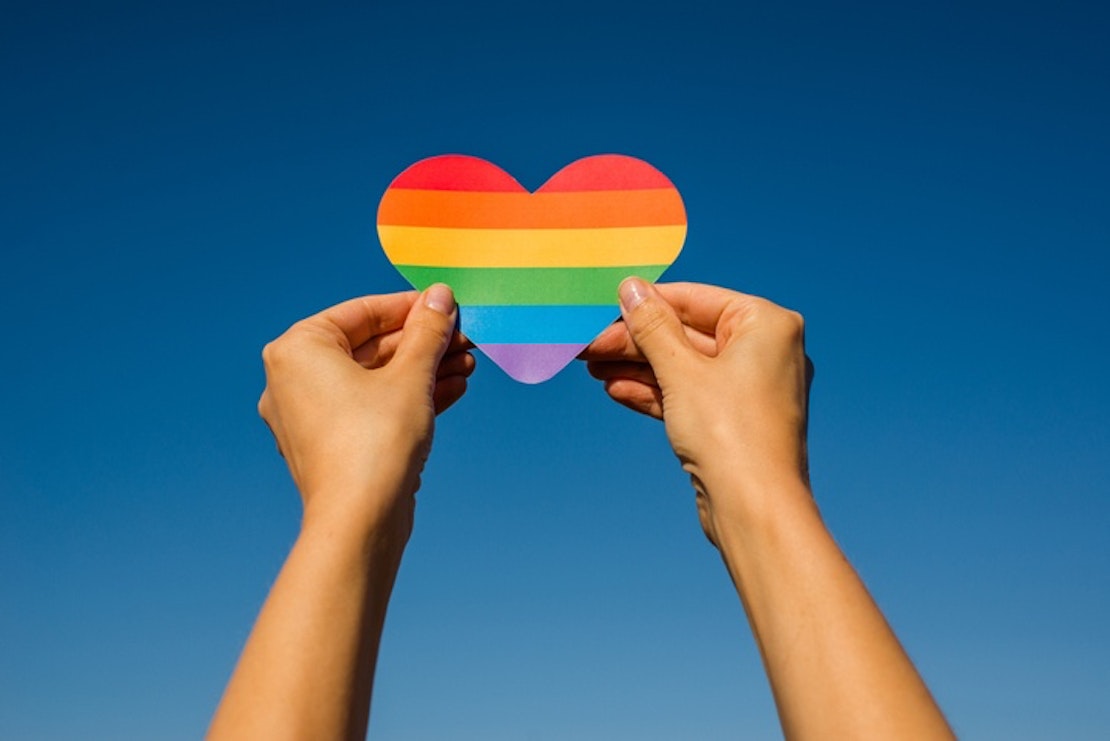 With Pride month upon us, there’s no better time to look back on the lessons we’ve learned along the way — not least on our ability to bring about rapid social, cultural, and legal changes via respectful debate, patience, and listening to the views of our opponents.

It’s also a great opportunity to acknowledge how, in doing so, the LGBTQ+ community has learned a lot about what makes relationships work, and researchers now have hundreds of studies under their belt for why this is.

A study published by the Open University has found that gay couples are likely to be happier in their relationships than their heterosexual counterparts, so let’s take a look at a few more lessons we can learn from  LGBTQ+ couples.

Gender stereotypes can be a breeding ground for dissatisfaction in relationships. Pay inequalities, expectations around childcare, and historical perceptions of gender roles at home can all cause resentment, miscommunication, and tension.

According to a study by Daniel Carlson and colleagues, relationship quality and stability are generally highest when couples are happy with their divisions of labor and find them equitable and fair. This is often the case with same-sex couples. Researchers Abbie E. Goldberg and Maureen Perry-Jenkins also found that same-sex couples are much more willing to share traditionally “masculine” or “feminine” roles at home alongside routine tasks.

In contrast, research on heterosexual relationships consistently shows that the responsibility for domestic chores falls disproportionately onto women. Men are far more likely to overestimate the time they spend on chores, while women underestimate their time. So, learning how to split household chores more fairly as a couple is key!

When it comes to childcare, LGBTQ+ parents are also more likely to mutually interact with their children, whereas, in heterosexual relationships, parenthood can highlight further gender divides in the division of household jobs. While women are now an essential part of the labor market and often work as many hours as their male partners, they are still expected to put in a “second shift” back at home.

In essence, LGBTQ+ couples don’t have cultural norms, predefined gender roles, or stereotypes to fall back on when it comes to splitting labor at home, so they have to find a balance that feels fair to them, talk through their preferences, and negotiate their schedules and commitments to agree to an even split.

LGBTQ+ people have faced centuries of prejudice — and still face it today, even from friends, family, and work colleagues. Yet, the fight for equality has pushed LGBTQ+ communities to truly celebrate their sexuality and gender, take pride in it, and explore what it means — something heterosexual or cisgender couples may take for granted.

One caveat here is that this celebration of sexuality doesn't always apply to the public arena. The Open University study found that LGBTQ+ partners were less likely to show affection in public, often due to fears of social stigma and personal safety.

Living in a society where your well-being is at risk takes bravery and courage to be who you are. It also requires you to own your vulnerabilities and be sensitive to those of your partner.

Heterosexual couples seldom, if ever, sit down and talk about their sexuality or how they celebrate this in public. Yet being attentive to a partner’s sense of personal comfort around public displays of affection (PDA) is beneficial for any relationship, whatever the couple’s sexuality.

Lesson 3: Think outside the box

As the research on gender roles suggests, outdated socio-cultural norms can structure the couple dynamic in heterosexual relationships, resulting in imbalances in power and unfairness in the domestic division of labor. This is a recipe for resentment and conflict!

LGBTQ+ couples, on the other hand, are more willing to think outside the box of what a typical relationship should look like and be more open to non-traditional relationship models. They are more likely to resist social norms in their partnerships and embrace polyamory and non-monogamy, for example, than heterosexual couples are.

Straight people could perhaps take a leaf out of the LGBTQ+ relationship rule book or discard the book altogether. Psychologist and author Meg-John Barker suggest that all couples can rewrite the rules, for example practicing “new monogamy”, alternative commitment ceremonies, and different ways of understanding gender and that this can generate novel ideas for managing conflict and improving their connection together.

One of the most common causes of relationship dissatisfaction is frustration caused by uncommunicated boundaries and expectations. We often forget to have these discussions because our partner is supposed to already know and act on our needs and wants.

In their  ‘Enduring Love?’ study, the Open University found that acknowledging that a partner is not a mind-reader encouraged open communication and a greater sense of togetherness. Talking over and establishing healthy boundaries in a relationship created limits and guidelines which allowed both partners to feel comfortable.

LGBTQ+ couples are well-practiced in working out boundaries in their relationships. This can open up the conversation around public displays of affection to be more attentive to a partner’s sense of self and emotional security, or start a discussion around the boundaries of consensual non-monogamous relationships.

A study by Colleen Hoff and Sean Beougher found that many gay couples spend time working out detailed agreements about what kinds of sexual contact are permissible outside the relationship, under what conditions or circumstances, and how often. This fostered a sense of trust and openness in the relationship that extended beyond sex and intimacy.

While negativity bias can often make us focus on our weaknesses or irritations, the benefits of positive thinking can significantly improve our psychological and physical wellbeing.

According to a study, LGBTQ+ couples tend to manage disagreements more positively and are more likely to use praise and encouragement rather than criticism, blame, or nagging — and are happier in return.

This corroborates other research that shows giving praise is a core factor in relationship happiness. One study revealed that couples who communicate partners’ achievements and strengths were more committed to each other, more hopeful of the future, and experienced a greater sense of intimacy. Plus, partners felt more confident and motivated to reciprocate these strengths in return.

Dr. Terri Orbuch’s study of long-term couples, on the other hand, found that men were twice as likely to break up with their partners if they didn’t get affirmation often.

Studies show that heterosexual couples are particularly likely to believe that they “should” know all about each other, sexually, without discussing it.

Same-sex couples, on the other hand, tend to speak about their sexual wants and needs specifically, often, and throughout their relationship. They devote time and energy to de-stigmatizing sex, sexual activity, and sexual body parts, and start from a position of wanting to learn about a partner’s eroticism and desires rather than taking them for granted. And this sexual conversation style results in more satisfying sex — emotionally and physically.

As sex writer Dan Savage says, gay couples often ask, “What are you into?” — these four "magic” words are something that most straight couples simply don’t use.

Because “taken for grantedness” is not an option that is available for LGBTQ+ couples, research by Jeffrey Weeks and colleagues has shown how they are more likely to think about what they’re doing and why they’re doing it.

LGBTQ+ couples are therefore more reflexive, they actively and explicitly work through,  together,  how they want their relationship to work.

In their study of young same-sex couples’ decision-making around commitment ceremonies, Brian Heaphy and colleagues found that young LGBTQ+ people expressed highly emotional, rational, and pragmatic reasons for committing rather than simply falling into the trope of marriage.

While they conformed to traditional relationship scripts in one way, they were also active and sometimes highly reflexive “scripters” of the convention. Being reflexive enabled them to craft the relationships they chose rather than fall into the ones chosen for them.

LGBTQ+ couples’ openness and creativity may make them more open to change and adaptability — two qualities that are crucial in long-term relationships.

The absence of cultural scripts, and commitment to actively working at a relationship, may also explain why the ’Enduring Love?’ study also found that LGBTQ+ couples are happier in their relationships and with each other than their heterosexual counterparts.

About the writer
Dr. Jacqui Gabb
Jacqui is Professor of Sociology and Intimacy at The Open University in the UK and Chief Relationships Officer at Paired.
Her 'Enduring Love?' study on long-term couple relationships has received widespread critical acclaim, with findings being reported in national and international media, including: BBC World News, CNN, the New York Post, and more.
Her research and impact activities have been recognised by three prestigious awards: the BSA Philip Abrams Memorial prize (2009, the Open University Engaging Research Award (2014), the Evelyn Gillian Research Impact Award (2016).

Whatever relationship stage you’re at, there’s always a great question to ask
By Sarah Finley
Connection

The Positive Impacts of TV on Your Relationship

Yes, binge-watching your favorite show with your partner can be an opportunity for bonding
By Dr. Jacqui Gabb
Connection

What Does Romance Mean to You?